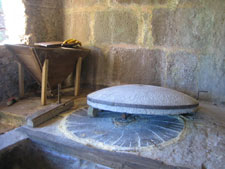 Flour mills were, for centuries, an important source of sustenance for the population of Bianya. It is true that they were not large mills, as the streams that run through the valley are not particularly fast flowing, but big enough for the families in the valley and neighbouring villages.
The mills at Farró, la Boada, el Colomer, la Mola, Pladeveia, del Solá, del Puig, de las Planes, apart from others, are testimony of a more or less glorious past, but with modern evolution have become inactive, since the techniques of milling have changed a great deal.
Yet the mills maintain their historic interest and are testimonies of agricultural life, which has always formed part of the history and culture in the region.
In la Canya, along the river Fluvià, there have also been paper mills, the production of which had great importance and was well known in the whole of Catalonia, especially during 18th, 19th and 20th centuries.
Tuits de @DeBianya